An issue that kept me awake.... 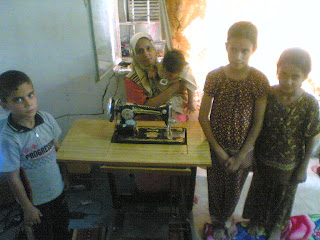 Good morning…
I work as a volunteer with an organization to send water-purifying systems to Iraq, for two or three years now, (http://www.iraqwaterproject.org/), the work is excellent; we sent many systems to hospitals, clinics and schools, in many known and unknown Iraqi towns and villages. Now I started working on another project; supplying sewing machines to groups of displaced women, on the same places where we sent the water-purifying systems. Until now, I sent sewing machines to two or three groups. I sent many e-mails to many people, some answered my call and sent some donations, which I added to my personal donations, and sent to Iraq, where sewing machines and cloths were bought to groups of displaced women in Baquba, Al-Saqlawieya, Falluja, and finally- Karkook. But the groups of Karkook still need another machine. I sent them three, but they need at least one more. I also sent money to buy some fabric, but the budget is small, and they still need more cloths.
Now- I need an organization or a group of people to commit themselves with me in this project. At the project of the water-purifying systems we always agree on a plan of action; like- this month we shall send three systems to the Marshes area, so- the organization works on collecting the necessary sum of money, then they send it to me to buy the systems and distribute them among the appointed locations. Then we put a new list of proposed locations, start collecting the donations, send them to me to buy a new lot, and so on…
I want to carry out the sewing machines project the same way, I mean- not in a random way; I wait till I get some donations, then buy a lot of cloth and sewing machines, then wait for more donations that might, or might-not, come…
And because I comprehend the importance of this humanitarian project, I want it to be a permanent project for the groups of displaced women, or those in far-off poor villages, where they can learn to sew within this project, then sew the clothes of their children as a first step, then we can move on to a further step in the future, when they can sew to sell the product at the local market, so the project would keep on financing itself by the profit.
There must be some honest hands inside Iraq to follow up the project, and now I think we are building a network of honest people so they can be the coordinators of this project. At each location there is a coordinator who will follow up the project. It is a purely volunteer work, without a financial revenue to anyone working in managing the project or following it up.
I wish I can find donor from Arabic or non-Arabic organizations, who have a general humanitarian understanding, and a will to finance this project for some months to come, until the conditions of Iraq will improve and settle to calm.
The price of one sewing machine is around $200, each group needs machines according to the number of women at each group; sometimes two, sometimes four. We also buy about $200 worth of cloth for each machine, as an average. Meaning- if we wanted to send two machines we need $400 for them and $400 for cloth. I usually send the receipts with the pictures of the machines and the cloth too, to each donor, but this time I want the issue to be fixed with one donating organization, to which I send constant documentations.
This is a humanitarian deed, and we ask God to make it purely offered towards his generous face…Amen.
My regards…
Faiza
# posted by Faiza Al-Araji @ 8:56 pm